Have you ever heard of a type of billiard game played with table-fixed obstacles preventing you from making a pocket? If yes, that’s the Bumper pool.

If you haven’t, permit me to introduce you to the billiard game. Bumper pool is a type of pocket billiards game that is played on a rectangular or octagonal table.

The uniqueness of bumper pool, among other types of billiard games, is the nature of the bumper pool tables. This table has an array of cushioned obstacles fixed on them, and only two pockets, unlike other billiard tables.

Even though the game has been around for some time, many billiard enthusiasts know very little about it.  Hence, the decision to write this article to enlighten you on the bumper pool history, and other details of the game.

History of the bumper pool

Even with some mysteries behind the history of the bumper pool, cue sports can be traced back to Europe as far back as the 1500s.

During these times, many games, mostly outdoor games, were created to keep people engaged during their recreational times.

A few indoor games were created too during this time, and one such would eventually evolve into bumper pool.

Now, no one is so certain about the development of the bumper-pool concept, or even the exact year it started. but its an extension of pocket billiards which is a branch of cue sports – which as mentioned started way back in the 1500s.

However, many propositions agree that the bumper pool was created as the table version of the popular croquet game.

This is because the bumper pool shares some similarities with the croquet. These include the goal of the game, obstacles faced in a bid to achieve this goal and a few rules obeyed during the game.

Cue sports are said to have originated in France, therefore the bumper pool history can also claim the same, just like all forms of cue sports have evolved from each other.

The spread and popularity of all forms of cue sports mean its possible for players in various countries to enjoy it as well.

Bumper Pool is a known game now precisely because of the unique pool table with bumpers associated with it.

Its table is quite smaller than the regular pool table and it is littered with bumper that propels ball off them if hit, similar to pinball.

Because of its unique table design, it means the rules of bumper pool are also somewhat unique too.

Despite its low popularity when compared to other standard billiard games, a lot of people still enjoy playing the game.

When was the game bumper pool invented

The first concept of cue sports was conceived in the 15th century. Since then the game has evolved, splitting into multiple versions, one being bumper pool. It is unclear just when it was invented with some claiming the early 1900s with others saying it was invented in the 1930s or 40s.

Bumper pool history is sadly a bit uncertain, its cue sports cousins’ are much better documented but finding exact dates for bumper pool is not as well recorded.

Bumper pool started its rise in popularity around the time the valley company started manufacturing bumper pool tables back in 1947.

These mass-produced coin-operated bumper pool tables meant people could really enjoy the game while at their local watering hole.

The game grew in popularity over the coming years reaching its peak during the 70’s and 80’s.

A lot of middle-aged men and women, today, have expressed how much fun was had while playing this form of pocket billiards.

Sadly, now its popularity has decreased to the point you are unlikely to find one of its classic tables in a local bar or pub. The glory days of this once popular game seems to be behind it.

Not all hope is lost on this bar-room classic, you’ll be happy to know. You may not believe it, but pool wasn’t always this hugely popular game it is today. It also hit a downward trend and lost popularity, to the point most pool halls closed their doors through lack of interest in the game. Hard to believe, i know!

Through some good fortune and some good movies, pool managed to be reignited from the ashes and now it’s flourishing again.

With all this being said, there is still quite a large community of bumper pool enthusiasts out there, still giving love to the game.

Let’s hope another chapter can be written in the bumper pool history books!

Generally, the bumper pool tables are built to be smaller than the regular pool table.

They usually come in different sizes, and have typically two pockets (one pocket for each player) and some bumpers; from 12 to 16. The size of the table often determines the number of bumpers it has.

Smaller bumper tables come with 12 total bumpers; 8 bumpers are fixed in the middle of the table, having one of the cross lines aligning with the pockets.

Then each side of the pockets has 2 bumpers flanking each other. For the larger tables, you could either find a total of fourteen or sixteen bumpers on them.

For the pool table with bumpers up to fourteen and above, there are three bumpers on each side of the table midway in-between the two pockets, not two.

The two pockets are located at the table centers along the rails and placed directly opposite each other.

There is ample space at the center of the table to allow gamers to play their balls around it. Even with its decreased size, you are sure of getting all the competitiveness and excitement that comes with a full-size pool table.

Yes, people still play bumper pool. However, its popularity has declined in recent years. This is likely due to the increasing popularity of other games, like pool and darts. Nevertheless, bumper pool is still a fun game that can be enjoyed by people of all ages.

I am certain it’s been an enlightening time for you going through this bumper pool history article.

In general, the bumper game with its pool table with bumpers fixed around provides avid pool lovers with a unique and challenging game.

The bumper pool table is space friendly, very affordable, and quite easy to maintain.

Let’s hope it can gain in popularity once again. 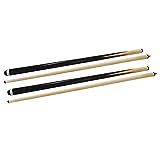 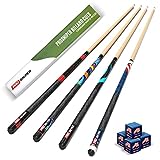 Know if Your Pool Cue is Straight & How to Straighten