What Does Chalk Do In Pool

Usually, before every shot, you will probably chalk up, but what does chalk do in pool? why do you chalk a pool cue?

This little blue cube of chalk seems to get everywhere, makes the balls dirty, makes your cues dirty, it can even get all over your hands. So why do we even bother?

I know when I chalk up, I feel I’ve prepared for the shot, its a kind of psychological boost and a time to focus and think about my next shot; but is there more to chalking a cue than just preparation?

Well, I wouldn’t be writing this article if there wasn’t, chalking your cue has a big impact on your shots and it’s advisable to chalk after everyone. Why chalk a pool cue is backed by science that we will be looking into here

What does chalk do in pool

I feel I want to answer “what does chalk do in pool” and “why do you chalk a pool cue separately” because although the questions are very similar they have some subtle differences.

A pool cue usually has a small rounded leather tip on the end of it, and it strikes a smooth spherical cue ball.

When the two make contact, especially when the ball is not struck with full on with a 100% of the tip (when some english is applied) the rounded tip can fail to grip correctly on the ball.

So, that brings us to the question; what does chalk do in pool? Chalk helps create friction between the cue tip and the cue ball. That friction results in the cue tip gripping the cue ball helping not only to add spin but give more consistent hits of the ball

Why chalk a pool cue

Knowing now what pool chalk does, we can now explain why we chalk pool cues.

As we have discovered, by applying chalk helps the rounded leather tip grip to the cue ball.

Can we play without the extra friction? You could still play but it will make it more difficult to play a shot with english.

Playing a shot with any form of spin will require you to hit closer to the edge of the cue ball.

Hitting closer to the edge of a spherical object with a small rounded tip is not going to consistently give you the shots you want.

Why do you chalk a pool cue? As chalk adds extra friction and grip to the cue ball, it helps with adding extra spin without miscuing “slipping”  off the edge of the spherical cue ball

Learn More…
Want to learn more about how long a cue tip will last? Check out how long they last and learn how to keep them in better condition for longer!

It’s been said that the early days of pool, before leather tips were a thing, players used to twist their cue into plasterboard to apply a chalky layer over their cue. They did this to limit the number of miscues that occurred during a game.

That was the start of how modern-day billiard chalk came into play.

We now have a variety of different brands of billiard chalk to choose from so there is no need to go drilling holes into your ceiling with a cue to help against miscues.

We know, what does chalk do in pool, but is there an alternative for pool chalk?

Although pool chalk is pretty much at every table around the world, there is not much need to go looking for an alternative, that being said, what are some alternatives for pool chalk.

When we learned what does chalk do in pool, we discovered that it provides extra grip on the cue ball.

So an alternative for pool chalk would need to do the same, provide some extra friction; some notable mentions would be:

I’ve even heard of cigarette ash working as a chalk substitute, although I have never tried so I can’t verify this.

You now should have a better understanding of what does chalk do in pool and why chalk a pool cue in the first place.

There is are benefits to applying billiard chalk to your cue and I personally recommend you apply after every shot.

Why do you chalk a cue stick has a lot to do with making better contact with the ball. Chalking will give you the grip to apply different forms of sidespin that will improve your game and reduce miscues. 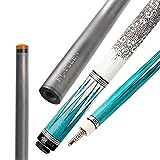 How to Measure a Pool Table Accurately (Felt or Cover)